Remember the Qipao craze I had a few months ago after watching In the Mood for Love? Well, I really wanted to make a qipao afterwards. I had some scrape fabric left over from my 50s dress — I bought a whole 4 yards since it was only a dollar something per yard, and a qipao doesnt need much fabric — I thought it was perfect for it. I had made two qipao before, but the fit was pretty weird. Also, I did not want to deal with the traditional front closure anymore as it was hard to make sure that the two “lips” actually match and closes without gaping.

I decided to use a burda magazine pattern, 2009/04, dress 115. It is a simple sheath dress with a pretty decent fit, for petite!! I really liked the pattern before as it is a really interesting pattern, but I never had an excuse to make a dress like that. So I thought– this is perfect for my qipao!

I made the following alterations:

Not too many changes, right? I am loving the results:

I decided not to do my usual frog closure– the seams isnt exactly how it is in a real qipao so I didnt want to try too make everything else like a qipao. I also decided to put in the effort and make the inside look nicer than just sergered — they were binded with bias tape (zoom in to above picture and you can see it on the inside of the skirt), much cleaner!

If I were to make this again, I would probably do something different about the front shoulder seam — moving it around made the shoulder seen a little wide, so maybe I should have moved the entire seam together, instead of just the center part. 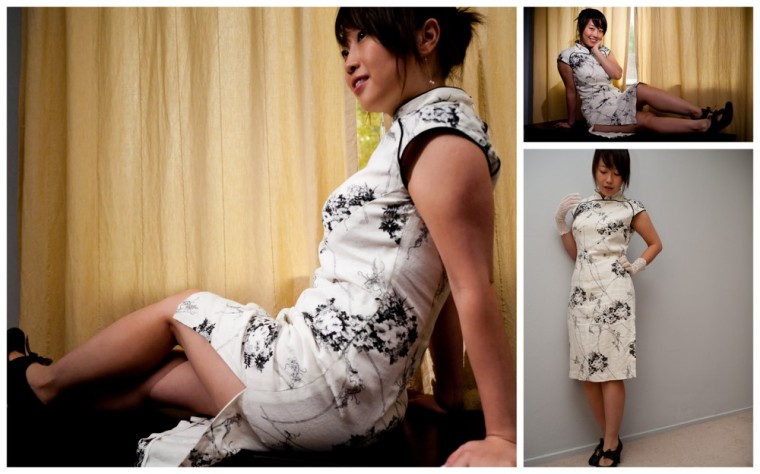 Even though I dont have much places to wear it to, I still love it a lot! I would definitely wear this much more than my old qipao pieces (which is never)!

This entry was posted on Tuesday, November 30th, 2010 at 9:39 pm and posted in finished pieces. You can follow any responses to this entry through the RSS 2.0 feed.
« White Winter Wool Skirt
Fabric Review~ »