It seems like bra making is all in the rage in the sewing world these days. So I decided to make my own. Unfortunately, there are not a lot of bra patterns I can choose from, and they are all fairly pricy and didnt have the style/size I wanted. Because I am still unsure of my size and whether I would be making more, I decided that I dont want to invest too much $ into this adventure, yet. 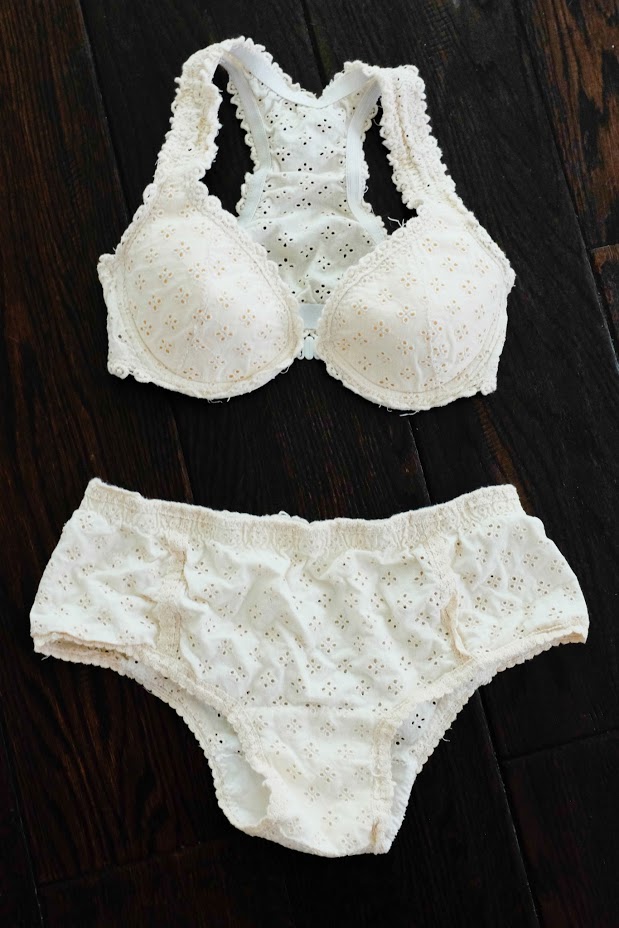 I made this bra from bra cups I had in my stash, fabric from an eyelet dress that I made a while ago and botched on some alteration later, lace my dad got me from china, and white knit in my stash. The only thing I had to buy is the underwire. I also made casing for the underwire. I drafted my own pattern.

This is not really a typical bra, I should say. The eyelet material I choose is not stretchy at all. However, it is very very pretty – so pretty that I want to wear it out without anything else on top. I had surrounded all the edges with lace and elastic. put in a underwire that is for size 30D/32C/34B. It has a front closure. I didnt do too much drafting – i cut out two pieces of fabric such that it will enclose the foam cup perfectly.

The construction itself was a pain. I think it took me 2-4 weeks without sewing anything else to finish this bra. I had to take out the elastics multiple times because the tightness was not right (and as a result there are a lot of loose threads). I had to sew in the front closure 3 times each before it was decently symmetrical and not too far apart. I am so glad I chose the linen fabric – it can withstand some crazy amount of abuse of unpicking and stitching. But even with my higher-than-norm standard for this, I feel that I still messed up the construction. one cup is actually slightly smaller/different than the other.

I also feel that the size is not right . I measured myself as a 30D, so I assume the underwire is the right size. But I think the cup isnt right as they squeeze my boobs a little and some spills out. But I also suspect that if i had used a smaller underwire, the cup would have more room to expand vertically and wont squeeze my boobs. (basically, maybe if the underwire is too wide, it stretch out the cup too wide?)

All in all, I do like the looks of this bra a lot and I like to join the club of bra makers, despite the fact that I wont be wearing it all that much due to the poor fit. I want to make some more lace bra with underwire. When I have recovered from this bra fatigue! To help that I made two undies from the left over fabric, one in the photo and one I was wearing when I took the photos! 🙂

This entry was posted on Tuesday, August 27th, 2013 at 7:00 pm and posted in finished pieces. You can follow any responses to this entry through the RSS 2.0 feed.
« Iphone Running Armband (with tutorial)
Little Frogman Sleep Pouch »